Hindsight is a wonderful thing, so with 2015 nearly upon us let’s cast a final glance on 2014, after all some exceptional places did get a visit! If you’d like to see more of the places featured, the links with take you to the original articles.

January saw a week’s visit to Malta, and between avoiding nervous British pensioners, and my attempts to source the biggest full English breakfast on the Island, we did manage to watch 9 games. For me there were two highlights, the games on Gozo, where there seemed to be more capacity in the Catholic Churches than residents! 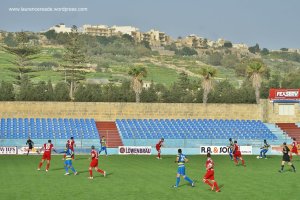 The trains all terminate at Lowestoft, and one solitary piece of track strikes out towards the harbour 200 yards away before giving up, blocked by the crossroads. Yes this the most easterly town in the UK, unequivocally defined by fish, although I did wonder whilst having my lunch at the local Wetherspoon pub whether my scampi was locally sourced- I do have my doubts!

Of course Lowestoft is famous for being the hometown of the rock band, “The Darkness” rather overshadowing the fact that classical composer Benjamin Britten was born here! Darts fans will no doubt point out that shy, retiring Peter “Snakebite” Wright lives locally!

END_OF_DOCUMENT_TOKEN_TO_BE_REPLACED

The WordPress.com stats helper monkeys prepared a 2014 annual report for this blog.

The Louvre Museum has 8.5 million visitors per year. This blog was viewed about 430,000 times in 2014. If it were an exhibit at the Louvre Museum, it would take about 18 days for that many people to see it.

I think Banbury gets a bad press it doesn’t really deserve. Yes I know Gary Glitter was born here, and Patricia Amos, the first person to be sent to prison for failing to send her children to school is a Banburian, and the odour of coffee from the factory does waft over the M40 as you drive past, but there’s more to the town that just those facts.

Perhaps the problem is that like many towns, you have to scratch a little. Remember the “Ride a cock horse” nursery rhyme? Well follow the A423 though the town, and there’s the cross (not the original, that used to be close to what’s now the shopping centre)  in the middle of a roundabout. Look out too for the fine lady (Godiva) statue by its side including the little frog at the horse’s hoof! Ever bought a loaf of “Fine Lady” bread? That’s from Banbury too.

END_OF_DOCUMENT_TOKEN_TO_BE_REPLACED

Programme NO (althought they do normally)

As a groundhopper there are truths to be found self-evident. Amongst these are that you will see mile after mile of motorway roads, and that you will eat in barn-style chain pubs named in part after a “Dukes of Hazzard” character and they will all smell of stale beer, farts and despair.

You’ll fly past football pitches on those rivers of asphalt and you’ll glance across and wonder who plays there, and you’ll make a mental note to pay them a visit; more often than not you’ll forget. END_OF_DOCUMENT_TOKEN_TO_BE_REPLACED

When Oxford’s United’s Youth team beat local rivals swindon town in the last round the assumption was that the away game would be played where Manchester City play most of their non-first XI games, Hyde FC’s Ewen Fields. That in itself would have been interesting, the club were Hyde UNITED when I went, and the stadium was predominantly red, both of which changed when City pumped in some of the oil billions. Now City have gone I wonder if the United and red will return? END_OF_DOCUMENT_TOKEN_TO_BE_REPLACED

Legend has it that in on Christmas Day 1914 on the Western Front, the opposing armies called an unofficial truce, climbed out of their trenches and exchanged cards, cigarettes and sang carols. The legend also has it that a football match took place. Research suggests that the match wasn’t as organised as some would have liked to have believed, but it’s clear that on a front line stretching 750k km from the Belgian coast to the Swiss border, the least that happened was several impromptu kick-abouts.

But to worry about the type of game is to miss its significance. The fact was that for one beautiful day, the slaughter stopped, due entirely to the actions of the soldiers themselves, not their superiors. In fact in subsequent Christmas Days both sides’ leaderships made sure that no truces would take place. So Christmas 1914 stands as a moment when humanity won over barbarity in the most unlikely of locations.

It was fitting that the 100th Anniversary should be celebrated in the military town of Aldershot, and parking up I knew that since the military were organising it, it was bound to be well-presented. After all I’d watched Benson Lions on September’s North Berkshire Hop!

The Army didn’t let me down, the staging was wonderful with the singing of “Silent Night,” in both English and German complementing the more usual marching band. For me though the sight that was the most memorable was banks of soldiers in camouflage in the away end. In the dim lights, it looked almost ghostly, a nod to the thousands who lost their lives in the dreadful carnage that followed.

It seems irrelevant that game was extremely entertaining, both teams managed to play competitive football whilst never losing sight of what the game was about. There was just the one goal, Lance Corporal Calum Wilkinson tapping home after a cross was parried out in his direction. Both sides hit the woodwork but the man of the match was unquestionably the German Armed Forces’ keeper Corporal Andreas Forster who pulled off a string of fine saves.

It the end of it all the teams embraced and smiles were exchanged, and I’ve little doubt multiple beers were quaffed later! Getting the tone correct for an event like this is not easy, but this was a wonderful advert to both countries’ militaries, and the spirit of Christmas in general.

Most true it is, I dare to say,
E’er since the Days of Eve,
The weakest Woman sometimes may
The wisest Man deceive.

There’s no escaping the fact that the Surrey town is well-to-do. Whether its the 138 listed buildings in the town, or the world-famous Charterhouse School, the area oozes gentility. A famous son was Jack Phillips, the radio operator on the RMS Titanic who refused to desert his station even when the vessel was in the final throes of its sinking.

Altogether stranger was the curious case of maidservant Mary Toft who convinced the town that she had given birth to rabbits! In 1726 eminent physicians examined her and the story caused a national sensation. Eventually Toft was found out after a porter was caught smuggling a dead rabbit into her chamber, and she confessed to inserting at least 16 rabbits into herself to “enable” their birth! The resultant public mockery, not least by satirist William Hogarth created panic within the medical profession and ruined the careers of several prominent surgeons, but Toft escaped without charges being pressed. END_OF_DOCUMENT_TOKEN_TO_BE_REPLACED

There are several strands to my footballing life, what I travel to watch personally is often different from what I’d organise a groundhop to, and I the only club I watch with any degree of regularity is my home-town team Oxford United. Perhaps the great irony of my existence is that the further the club slid down the footballing pecking order the more creditability I gained in my groundhopping life!

END_OF_DOCUMENT_TOKEN_TO_BE_REPLACED

I suspect Tilbury is one of those towns which few have visited, but many of their possessions have. The port town replaced the London docks as the major destination for goods entering England via the Thames Estuary, and for exports heading out. Today the containers arrive and leave at a bewildering rate, and wherever I looked, in the background I could see the twinkling lights of the docks. END_OF_DOCUMENT_TOKEN_TO_BE_REPLACED