Here’s a thought. If I was the chairman of a club about to host a game on a hop organised by GroundhopUK, the slot I’d want is the first game on the Sunday. That is of course at variance with just about every club official I’ve spoken to when we first ask their club to host! There is always resistance to moving fixtures, it’s why for example we were turned down for a hop by the Highland League recently, but when you look at the the various time slots, there are some fairly startling conclusions to be found.

I remember one league who were interested in organising a hop sent out an email to all member clubs to gauge interest. The response was interesting, and I do still have the spreadsheet. About 10% of the clubs responded, and those that did so were in favour, but wanted a 3pm kick-off. You can see why, keep as much as possible as normal, but over the years Chris Berezai and I have learned a lesson. Understand the inconvenience, but look at the time slots according to how much competition there is for spectators. That’s why I regard the Sunday morning slot as being so good, no one else will be playing so it then becomes a case of attracting the crowd to your ground.

And let’s face it, Thrapston had reasons to need that prime slot. For a start Chancery Lane is very much a cricket ground at this time of year, so a Saturday kick-off was impossible. That also means that the club are well used to playing Friday evening fixtures, so some hoppers would have taken full advantage of that and opted to miss this game. That proved to be massive mistake, as this day proved to be one of the best days on a groundhop that I’ve ever been involved in. I know one hopper, reasonably local to me, that had “ticked” Thrapston so decided that the two Peterborough League games after this would be on no more than fields, so stayed at home. He then must have sat on social media horrified as all three clubs were on fully enclosed grounds and put on wonderful events for their visitors! Prejudice is so destructive!

And Thrapston was a wonderful way to start it all off. From the curries supplied by their sponsors, to the real ales, the club put themselves in the perfect position to make the very most of their day. They beat an out-of-sorts St Neots Saints side easily in the sunshine, but what I’ll remember Thrapston Town for what happened as we left.

Over the years on this blog I’ve explored the concept of charm, and how you really can’t teach it. The final whistle went and I watched slack-jawed as club chairman Gary Petts made it his business to shake hands with each and every one of the crowd as they left to say thanks for coming.

Now as a hopper I revisit grounds infrequently, but a gesture like that I’d like to think will gently push more people into watching Thrapston. And I will certainly be one of them. 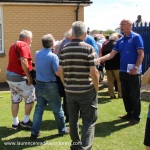