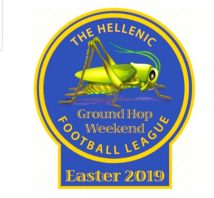 So the Hellenic Hop reached it’s final day and we’d been fortunate in so many ways. Firstly the weather had been kinder than it had been to Phil Hiscox and the South West Peninsula League the previous Easter, and the clubs in the most part had covered themselves in glory with some excellent hosting. The coach inched its way out of the Almondsbury Interchange Hotel, and I relaxed as Robyn managed her usual trick of falling asleep as soon as the coach started moving…

Our first game was a good example of why I was so relaxed. Bishops Cleeve have returned to the Hellenic after a stint in the Southern League, so I knew they had both the facilities and the manpower to stage well. In fact their staging caused only two issues, one we could deal with easily and one we didn’t see at all!

The first was that the club have moved from hard copies of their programme to an electronic version. Now I’ll leave you, dear reader, to form your own opinion on the pro’s and con’s of that, but with my GroundhopUK hat on, a hard copy of the programme is an essential part of the event, not least for our Advance Ticket holders! The issue was easily dealt with, Chris Berezai got our printers to print the electronic copies a day or two before the event; enough for the ticket holders, and a few extra for those turning up on spec.

The second was that I’m fairly certain that a few hoppers missed the game altogether! Bishops Cleeve have always played at Kayte Lane (although the ground was styled Stoke Road) but moved into their new home further along Kayte Lane in 2002. We only realised that some hadn’t picked up on the move when one of our party commented that he didn’t recognise the place, and for good reason!

For some then a bonus tick, as Cleeve barely needed second gear to beat a Shrivenham team that looked like the season couldn’t end quickly enough.

It was a pleasant if a little low-key morning. Teas were drunk and legs stretched as the steam trains on the Gloucester Warwickshire Railway chuffed by bound for the line’s terminus at Cheltenham Racecourse. After 10 games of this hop it was lovely to still be this relaxed.

I know I’ve said it before, but having someone from the club to meet the coach is a godsend. In Tuffley’s case with Glevum Park being accessed via a footpath off an industrial estate that went double! Now if one or two got a bonus tick at Bishops Cleeve, then I very nearly did here. I’d visited during for a cup final during Tuffley’s rebirth in the Gloucestershire County League in 2011, and the place looked down at heel but full of character. I loved the little seated stand by the touchline then, and I still do now. Hopefully it’ll be preserved for years to come.

Thankfully the character is still there by the bucketload but the place has been transformed, not least by the addition of a Stadium Solutions stand to the right of the near goal. Moreover the whole feel of the afternoon was vibrant, Tuffley clearly thought about what they wanted to do, and had both the staff and the know-how to do it beautifully, even down to a ticket to get Chris and I into the boardroom at half time for a much needed cup of tea! Before the game the spuds with chilli seemed odd for such a hot day but I can assure you they sold quickly!

They were as impressive on the pitch too, despite the heat and humidity. Fairford were excellent hosts back in original Hellenic Hops, who could forget the hopper storming off the bus because Chris put a “Heavy Metal” video on? It was Blondie’s greatest hits, so if he ever books again I’m bringing my Metallica DVD! Here they had few answers to Tuffley’s threat going forward, and 3 -0 was a completely realistic result.

The hop’s finale was perhaps the most intriguing. It was common knowledge that Thornbury’s Mundy Playing Fields hadn’t been the best appointed ground in the Gloucester County League so folks wondered how on earth they’d managed to get the place up to Step 6 ground grading standards?

The answer proved to be fascinating. Getting the place enclosed wasn’t massively difficult although the council did insist on a metal net fence. Then there was the stand, placed rather awkwardly in a corner, necessitating a larger than normal no-standing zone in front of it.

That was because a gas main running pretty much underneath a line from the pay gate to towards the pitch before turning left and running parallel and around 15 feet from the pitch side barrier. Nothing can be placed on top of it (imagine a repair with a stand on top) and that went for the floodlights too. One floodlight on the clubhouse side is set back from the other two for that reason. Then just to make things interesting the powers be decided that the club couldn’t use the clubhouse for this game as the anticipated crowd would be greater than the clubhouse’s capacity; words don’t often fail me….

The choice of Newent Town as visitors was an odd one. The original opponents were meant to be Tytherington Rocks, but that game got played a week or two earlier.  Now from an organiser’s perspective the choice of opponents are of little or no consequence to us, as long as they’re a first XI; we’re just grateful they’ve agreed to play at an odd time. All thanks to Newent for their help, playing on less than 3 days rest, but surely it would have been easier to swap them for Tytherington?

The two sides served up a quite wonderful finale to the hop. Newent raced into an early lead then spent the second half defending grimly with keeper Alex Goode obviously struggling with a back injury. Could they hold on for the win?

History records that they couldn’t, Marcus Wormwell equalising a quite unbelievable 8 minutes into stoppage time, but in an odd way it was handy for me. Both clubs had been good to us, so a draw was an easy way for me to rather conveniently sit on the fence!

It had been a hugely successful hop, and definitely one where a league and its clubs had made the most of an unexpected opportunity. Thanks therefore to Brian King, and all at the Hellenic League for their bravery in jumping in where others couldn’t. Thanks also to the clubs and the legions of volunteers who helped make the event so successful.

Finally thanks to all those who attended and who helped publicise the hop in so many places. We’re always glad of the publicity although it does sometimes take some unusual forms!

2 thoughts on “The Gas Man Cometh”