My contact in Romania Andrei had alerted me to this highly unusual ground to visit, to the north west of the capital. He’s involved at Bucharest-based Floreasca, and was kind enough to organise travelling companion Sim and I a lift out to Buftea with the visiting team. It would save a lot of time, effort and worry in new country, and all of that looked in jeopardy when our flight was delayed, sat on Luton Airport’s runaway.

I’d done my research, the metro is ticketed completely separately from the buses, trolleys and trams, and just about every travel site says the same thing, don’t use the taxis. By reputation, the drivers overcharge, use indirect routes, and let’s not think too much about some of the other stories…. But the plane finally landed, it was 2.10pm and we positively had to be at Piata Romana at 3.15 so what were we to do?

The answer was to make our way to the arrivals hall at Otopeni airport and find the touchscreen machines to our right. They allow you to order a cab, the machine issues you a ticket, and the number on it is the number on the rear door pillar of the yellow car. The driver checks your ticket, you check his photo ID and the price per km on the door, and we made our deadline in Bucharest city centre and the ride cost around £5. It turned out to be a fair analogy for our Romanian weekend.

Make no mistake, Romania is slowly changing and for the better but hopefully the welcome the country gives her visitors will not change. Sim and I were stunned at how every man and woman we met in 4 days made us feel welcome.

The journey out was a little fraught. Notwithstanding the international issue of appalling Friday night traffic there was also the vexed problem of actually finding the Buftea Training Centre. On one hand you could see the place, a modern double-sided stand with grass and 3G pitches, but you couldn’t tell how to get to it from the main road and no there wasn’t a signpost! For a minute or two I swear every single non-Romanian passenger imagined just about every Romanian cliche out there. It really didn’t help when a horse and cart clopped by…

But with a set of instructions from a Buftea resident we got there in the end, and from then on we had the most amazing evening. The German club have 2 sides, both playing in over-35s football in Nurenberg and are a Jewish club. Perhaps it’s that background, although none of the players is Jewish, that gives them the impetus to go on annual tours. They’ve played in London, Majorca. and at Newlandsfield Park, Glasgow.

It was clear that their message is one of friendship, tolerance, and yes, beer, but they did have one problem, there was only 13 of them. So both Sim and Andrei were roped into bolster their numbers. Sim played for a completely unexpected 60 minutes, for an experience he’ll be dining out on for years!

Yes it wasn’t the most competitive of games but that really wasn’t the point, it was about 30 or so people with completely different backgrounds using the one thing they had in common as a means of friendship. And it that isn’t worth a cheer what is?

Gifts were exchanged, stories told, and beers drank. The sun set and we travelled back afterwards to just south of Otopeni airport. We stopped at a restaurant, and both German and English were stunned alike as we were greeted by traditional Romanian musicians and dancers, with a glass of wine before going for a meal. We all forgot those cliches and our preconceptions; this was the real Romania, and it had only taken Sim and I seven hours to find it.

It really was football played from the heart, and an experience no one there will ever forget. 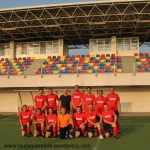 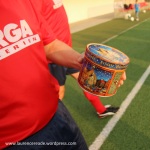 3 thoughts on “Play From Your… Heart”