In Scotland below the professional ranks there’s two visions of how non-league could look. On one hand there’s the new Scottish pyramid with the Lowland and Highland league champions playing off for the right to play off against the Scottish League’s bottom side for the final place in the league. On the other there’s the Juniors, not aged-based, more an alternative FA, with the North, East and West Regions ploughing their separate furrows, save for the Junior Cup.

I have many reasons to love the Lowland League after the success of the groundhop earlier in the year, but I do think the Juniors’ set up has a lot of merit. For the vast majority of the time travelling is limited to a club’s region, and kick-off times reflect the light available negating both the need and expense of floodlights. The only bugbear for me, as a 300 mile distant outsider is that fixtures are seldom known more than a fortnight in advance.

Perhaps that’s why whenever I see a groundhopper at a Junior ground they seem to clocked-up more grounds than normal. The grounds tend to be of the traditional style loved by the hopper, and the standard of this division, the top echelon of this region is on a par with SPFL League One, so why do I see so few Junior grounds on hoppers’ “Bucket Lists?” And yes, with my GroundhopUK hat on, I’d love to organise a Scottish Junior Hop!

The Ayrshire village of Hurlford is close to Kilmarnock and other than being the birthplace of former NUR and RMT union general secretary Jimmy Knapp has the distinction of sharing its gaelic name, “Àth Cliath” or “The Ford of the Hurdles” with Dublin. It’s a place born of iron and steel fuelled by the Ayrshire coalfields, but the last steelworks closed in the 1970’s, a ship’s propeller mounted at the village cross being a nod to the past.

All too often as an area’s industry declines the fortunes of the local football team tend to follow suit but Hurlford United have managed to do the exact opposite. Formed in 1938, they were playing in the Ayrshire League Division 2 as late as 2000, but last season saw them not only play in the Superleague Premier Division for the first time in their history, but they won the Scots Junior Cup while their amateur side won the Scots Amateur cup too. The banner at the entrance to Blair Park reads “One Village, Two Scottish Cups,” but that success is even more remarkable when you consider the patricians of the Junior game nearby. How does a village side manage to compete with the likes of Auchinleck, Irvine Meadow, Kilbirnie, and Cumnock?

This was Hurlford’s last game of the season, destined to finish runners-up behind Auchinleck Talbot, but for Shotts, third from bottom there was tension. They needed to take a point from this game to go ahead of Arthurlie, sidetracked at Pollok winning the West of Scotland Cup, and avoid a two-legged play-off with Division One’s third-placed team Kirkintilloch Rob Roy for the final spot in the top flight.

All too often seasons boil down to fine margins, a missed shot here, a scuffed pass there, and all mixed in with a large dollop of confidence. Make no mistake, this game could have easily been won by Shotts, or finished goalless, either would have been acceptable, but in the end a long skidding shot from Chris Robertson and Ryan Donnelly’s strike put the tie out of their reach. Alan McCrum’s fine strike was no more than consolation, and Shotts were condemned to that play-off. 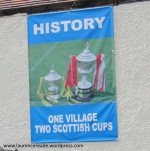